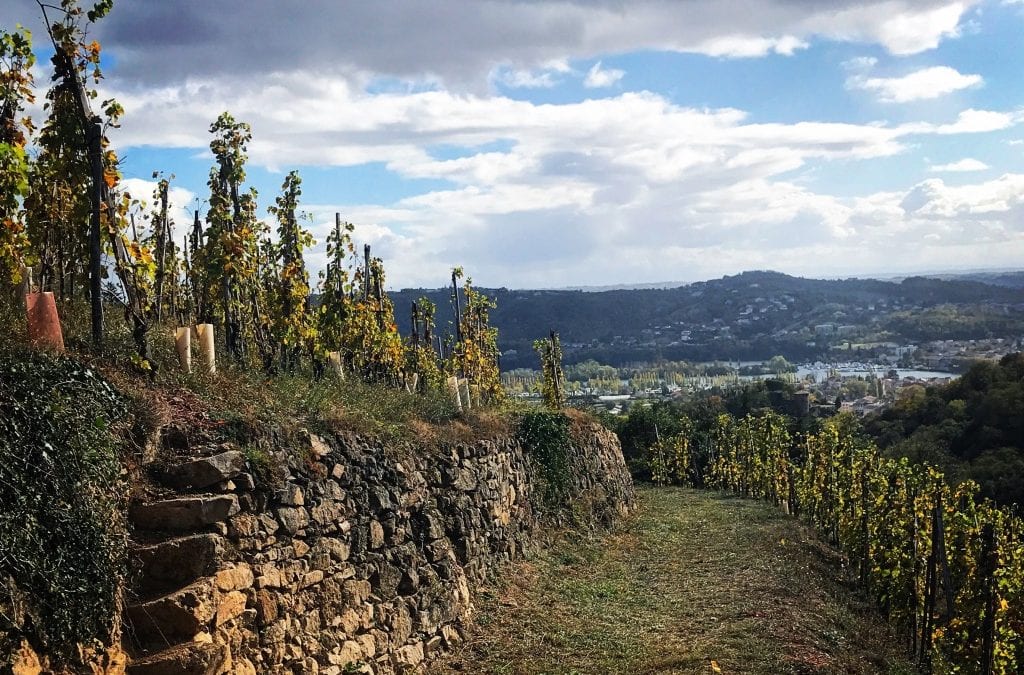 Standing at the top of her vineyard in Condrieu, Isabelle Guiller quietly surveys her land and then carefully descends old rock steps that she uncovered beneath loose stones and soil multiple years ago. Their vines are planted on steep slopes with small terraces dug into the hill and protected from erosion by carefully stacked stone walls. 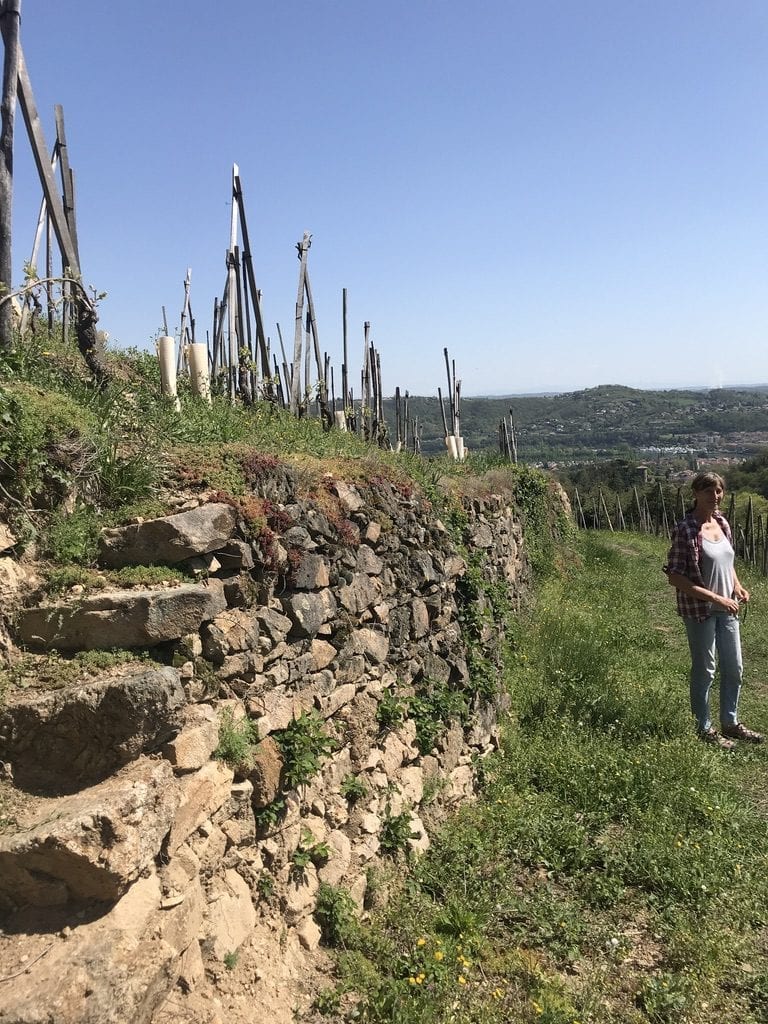 Isabelle standing in her vineyard

The narrow rows between vines require those who traverse them to form a straight line and pay special mind to where the edge lies. Isabelle descends the stone steps, that connect the terraces, with an admirable level of grace and sure-footedness. That of which can only come from walking up and down that unforgiving narrow path a countless number of times. The same comfort that the farmers who built the steps hundreds of years ago must have possessed.

Many years ago, Isabelle brought Henri to the hillside on a first date. Upon seeing the area, they both were immediately smitten by its raw beauty and history. It was then, that Henri promised Isabelle that he would build her a house on the hilltop overlooking the valley.

â€œIt completely swept me off my feetâ€¦â€ Isabelle explains, â€œbut at the time, I had absolutely no idea how much work it would be for me as well.â€ She smiles and laughs reminiscing about their start, â€œAt first there were no structures, except for an old roman-style farmhouse that we still to this day arenâ€™t allowed to restore.” 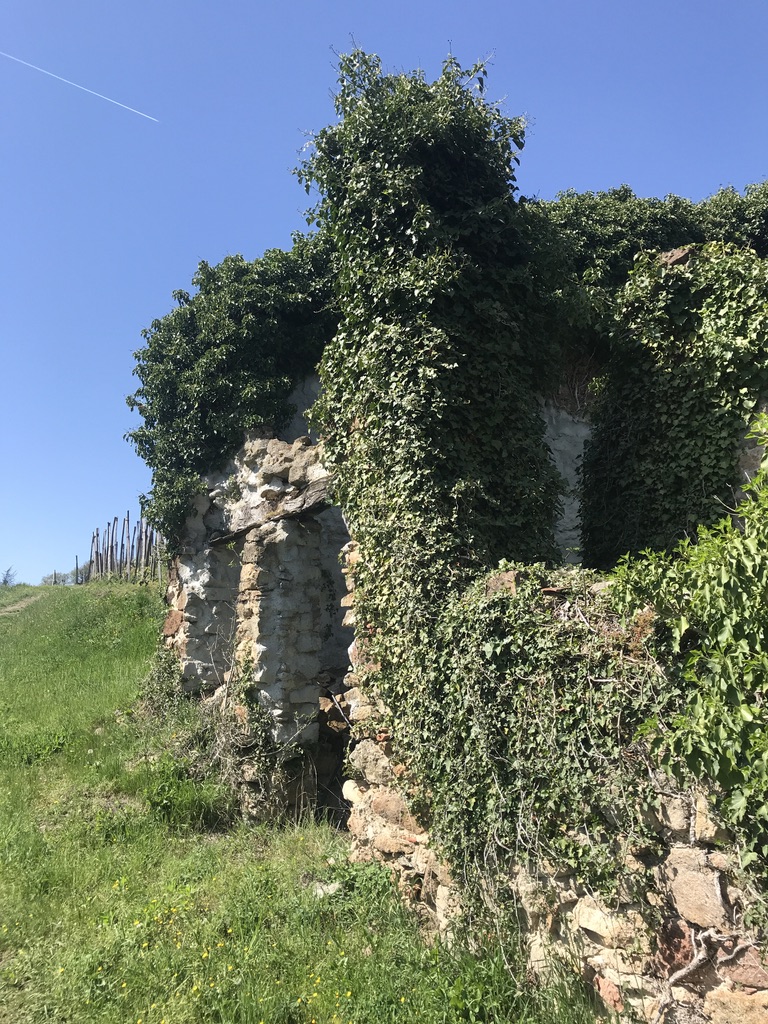 The partially collapsed farmhouse was used, for what the couple believes to be hundreds of years, before being abandoned. It is now covered by thick ivy and stands as a reminder of one of the many forgotten stories that these hills have witnessed. Henri came from a family of mariners who worked along the RhÃ´ne river, yet he was determined to breathe life back into the ancient vineyard. Isabelle jokes that his first real love was the river and then later in his life it became her. It seems appropriate then, that their home and vines stand watch over the small riverside town of Condrieu and the meandering RhÃ´ne.

â€œHenri and I were both seduced by its beauty and never asked questions about the difficulty of cultivating vines here. We were young and enthusiastic, and that was enough.â€ 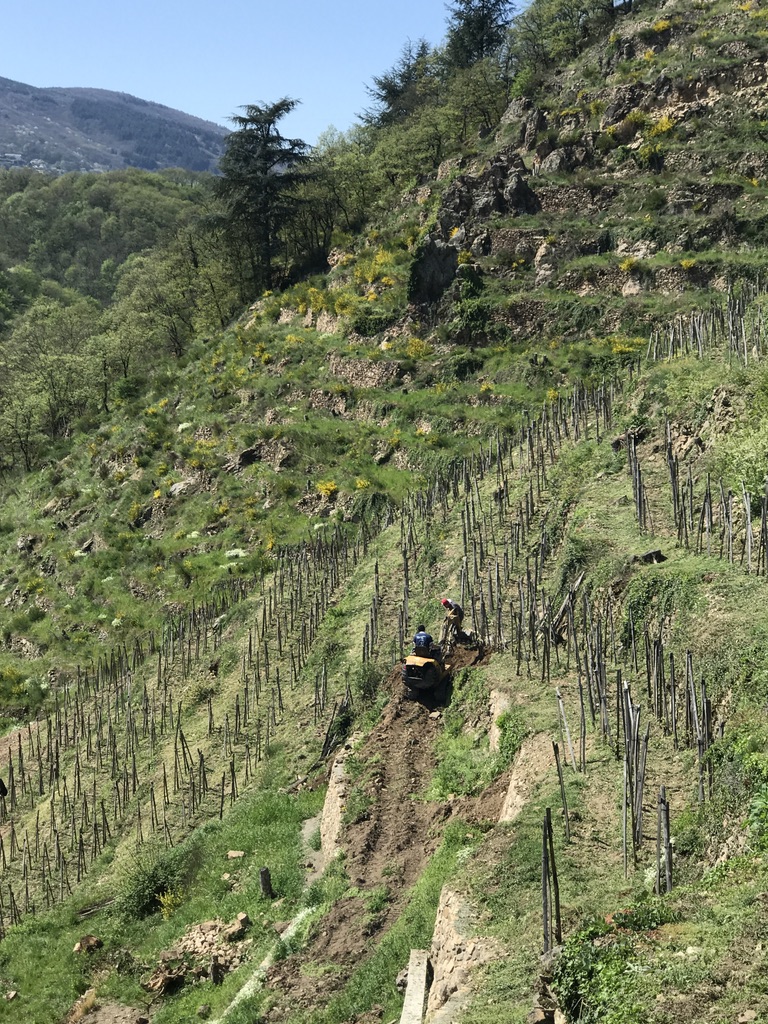 Today, the property is managed and kept by Isabelle and their 22-year-old son, Antoine. Antoine plans to follow the footsteps of his parents and a long line of vignerons (people who cultivate grapes for winemaking) there before them. Footsteps that are not made easy due to the arduous slopes that one must constantly work. Before 1992, the hillside of their 1.5 hectares in Condrieu was a dense forest covering the remains of a once prosperous vineyard. During the first world war, the vineyards that were worked for thousands of years were in a large part abandoned in this area. In a time where most of the able body workers were needed in the factories or on battlefields, the art of winemaking in difficult terrain was not possible for many. Much of the hillside surrounding Clos de la Bonnette still shows ancient scars of old terrace walls enveloped under the now thick vegetation.

The region of Condrieu is a historic winemaking area that dates back to at least 2000 years ago. The first documentation of the region was from Roman Emperor Domitian, who ordered all the already existing Viognier vines to be uprooted in 92 AD; this was done in an attempt to keep his soldiers sober. Thankfully for Roman soldiers and people today, the vines were re-planted in 280 AD by Emperor Probus; this was done to boost morale. During Roman times, Condrieu was a strategic point of trade with roads leading from the banks of the RhÃ´ne river to Saint-Ã‰tienne, 28 miles (45 kilometers) away. The vineyard overlooks those ancient roads that once bustled with the traffic of merchants, royals, peasants and fellow vagabonds.

Today the hill was completely quiet, except for the slight clangs of Antoineâ€™s rake as he separated roots from the rocky soil. He labors away methodically under the hot sun, in an effort to restore one of the terraces and get ready for planting more Viognier vines.

To resuscitate the almost forgotten land, one of the first things Isabelle and Henri had to do was clear the overgrown vegetation and restore the old terrace walls. Which is not an easy feat when using large machinery is impossible on the steep slopes. A decision must be made regarding the removal of each tree, either it is dragged up the hill piece by piece or carefully burned and mulched back into the soil.

A small portion of the wall (about 10 feet or 3 meters long) could take up to 4 full days of work to restore. Isabelleâ€™s main wish while rebuilding these walls, is to find flat rocks that stack nicely. 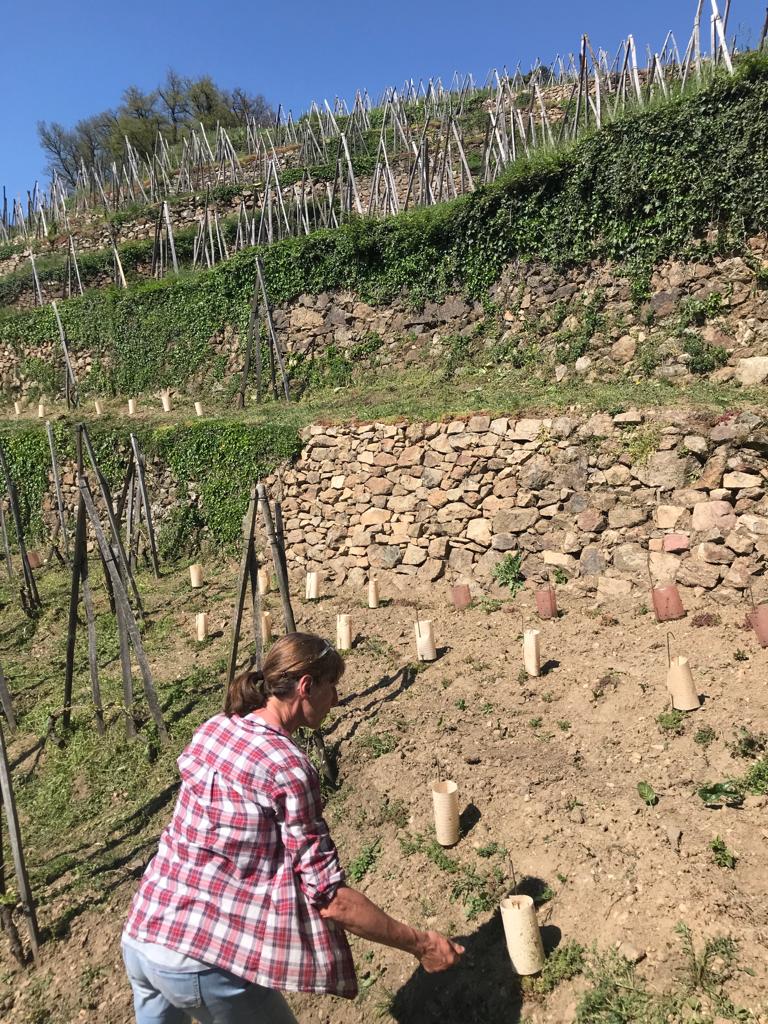 Isabelle standing next to a collapsed wall that she fixed

Unfortunately for her back and sanity, she uses the stones found in the vineyard and from other collapsed terraces. Most of the time they more closely resemble â€œthe head of a catâ€, rather than a crÃªpe. This makes stacking them in a secure enough way to plant grape vines, both above and below, quite the complicated task. The same distance could be covered much faster if concrete was used. However, the family is not a fan of this way and prefers to stick to the more ancient restoration methods. Resorting only to the easier way when vines are about to be lost and the weather dictates. During the reassembly of all the terrace walls, Isabelle was adamant that Henri does not put a single stone in place.

â€œHenri is a man who could do anything. He built our house, the winery, established the vineyardâ€¦ I knew if I let him put even one stone in place everyone would look at the terrace walls and say, â€˜Oh wow, nice work Henri!â€™, and I just couldnâ€™t have that!â€

Each careful step down the hill and each exhausting step back up is a reminder of what actually goes into the bottles of Clos de La Bonnette. Although the wine can clearly speak for itself as high quality, these conditions begin to put meaning into the controversial word of â€œterroirâ€.

The steep slope viticulture takes up 95% of the familyâ€™s time, out of the year they are in these fields close to 11.5 months. From the reassembly of walls, manual harvesting, vine management, and tending to the soil; everything must be done by hand. The hills are far too dangerous for machinery and the walkways are too narrow for a workhorse. 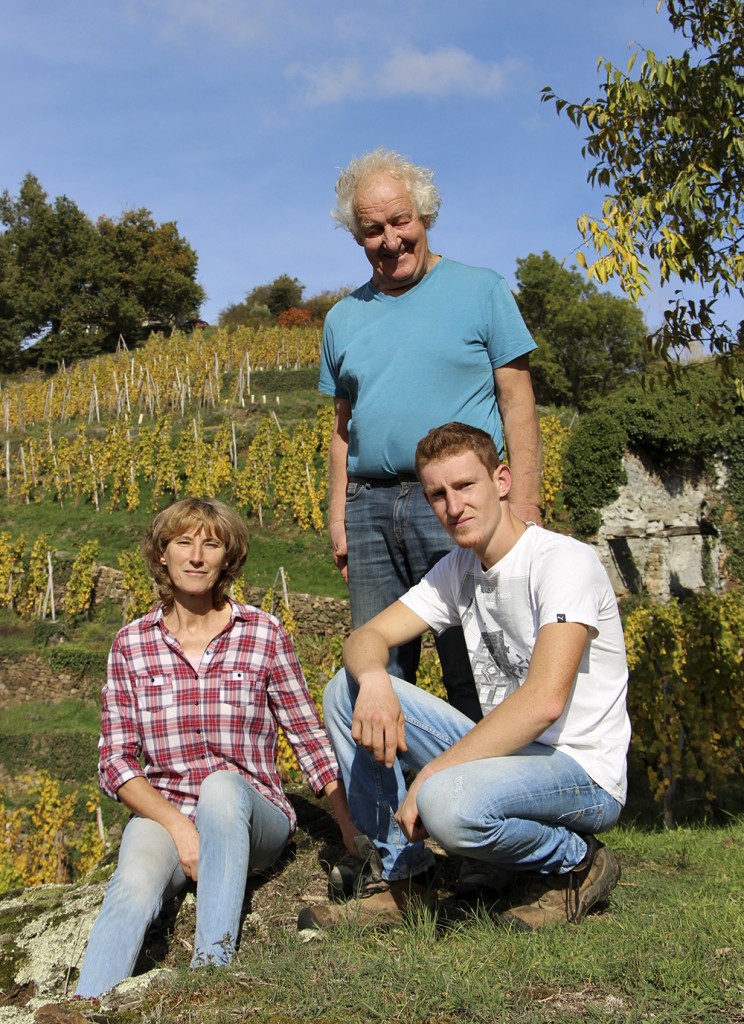 Isabelle and Henri had to â€œcondemn themselves to succeedâ€ when they first began working to renovate the vineyards in their piece of Condrieu. This is a mindset that the whole family still must maintain, otherwise, the dream of making their wine here cannot be a reality. It was the same conviction which, no doubt, had possessed the farmers here before them.

After asking for a rough estimate of the weekly hours it takes for the family to make their wine in this location. Isabelle responds grinning, â€œ on , on pasâ€, which is a French expression that could be translated to â€œwhen we love, we do not countâ€. Count hours, count tasks or even count the never-ending steps uphill. A philosophy about love that all of us could do well by keeping in mind.